Have you ever heard of Tom Leykis?

Don’t feel bad if you haven’t, he’s been gone for the last 3 years. But don’t worry you now have the chance again to get to know him and find out what he’s all about.

Tom Leykis is a radio host who has been described as a “shock jock” due to the fact that he’s brutally honest and it’s not afraid to say what’s on his mind. He’s been on the air for over 20 years and has had a syndicated show for a long time before being taken off the air due to the station’s format change. I’m not going to go on and on about who he is, you can google his name and find out if you want to.

Why am I writing about Tom Leykis you ask?

Very simple, most of the loyal fans of The Last Honest Guy come here to get a true perspective on the way guys really think. Well, if you truly enjoy real honesty and like to know how most guys think, here’s another example and good way to get proof of what you read on this blog.

For those of you who often get offended by the things you read on here and just can’t believe most guys think the way I put it on most of my posts you can now listen to Tom’s new online show and hear it for yourself. Tom can be heard live weekdays at 3pm Pacific in a number of ways; either through his website www.newnormalnetwork.com or www.blowmeuptom.com and also on any smart phone with the tunein app by searching Tom Leykis.

Keep in mind that when you listen to the show you are mostly hearing an opinion. Yes I said an OPINION! What that means is that there’s always exceptions to every rule and you certainly don’t have to agree with everything Tom says or any of the callers for that matter. Yes, expect to be pissed off and disagree as you often do about the things I write on here but none the less it’s still a portal to the true thoughts of men and a good resource for anyone who can’t seem to understand guys.

Just remember that it’s OK to disagree with his opinion, I certainly do on some subjects. For the most part, I think that everything he says makes a lot of sense and he certainly has a lot of facts to support it. 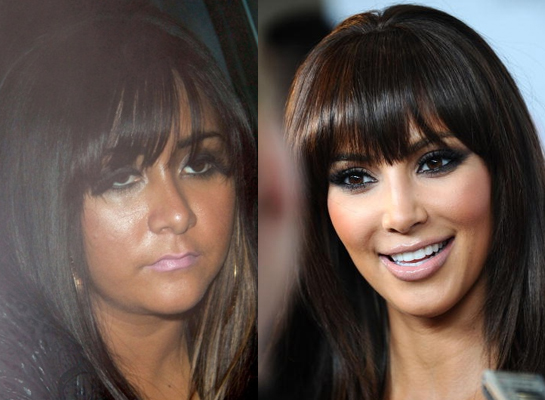 Over this past weekend as I’m sure you all know the VMA 2010 took place and for some it was a success while for others it was a complete disappointment. Which ever way you may feel is really not what I’m here to discuss. What I do want to talk about is some of the women who attended this event. To be specific just “Snooki” in comparison to Kim kardashian.
END_OF_DOCUMENT_TOKEN_TO_BE_REPLACED 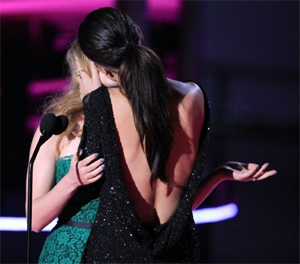 Sandra Bullock kisses Scarlet Johansson to get back at Jesse James?

So last night at the MTV Movie Awards Sandra Bullock kissed Scarlet Johansson and now everyone is talking about it (including us). It seem like the whole thing was just to get publicity but some are saying that Sandra Bullock was trying to send Jesse James a message to say “look at what you’re missing”.

Well, I’m not here to talk about how crazy and shocking this was (cause it wasn’t, it’s been done many times before) or if she was trying to get back at Jesse James. What I’m here to say is that if in fact she was aiming this towards Jesse James then it was useless and it probably meant nothing to him. END_OF_DOCUMENT_TOKEN_TO_BE_REPLACED

By now, some of you might have heard about a new iPhone app called the TigerText App. What is it? And what does it do?  This application works by allowing the sender to control when a text message is deleted from the recipient’s phone and the TigerText server. In other words, it automatically deletes the text message from both mobile devices and you can even set the timer yourself to “Delete on Read” or up to 30 days after it was sent, so if you have an iPhone this app could be interesting for you, also you can go online to find iPhone case and accessories and other Product recommendations for your phone. CPanel Dedicated Servers are run on a Unix web based control panel that provides a graphical user interface and automation tools that were developed to save many hours of basic and more advanced, essential administrative tasks to host multiple web sites. cPanel provides a 3 tier structure that offers features for administrators, resellers, and end-users of web sites to administer and control various aspects of website and server administration through a standard web browser using ports 2083, 2086 & 2087. Along with the graphical user interface; GUI, cPanel also has command line and API-based access that allows third party software providers, web hosting companies, and developers to automate basic system administration tasks. cPanel is designed to function a Dedicated Hosting service . As of November 2012, Cpanel supports CentOS versions 5.x & 6.x, Red Hat® Enterprise Linux® versions 5.x & 6.x and CloudLinux 5.x. cPanel no longer supports FreeBSD or any other Operating Systems at this point in time. A server with at least a 1 Ghz CPU, 1GB RAM, and 10GB’s of hard disk space is recommended to run Cpanel reliably and efficiently.

Some are calling this application the “cheaters app”. While this application does have the capability to facilitate cheaters, in reality there’s nothing to be worried about. Let me explain, say your boyfriend or girlfriend has this app installed on their iPhone, then it’s pretty obvious that they’re trying to hide something from someone (probably you). Most likely when questioned, the typical response might be something like, I use it so that my_____ (mom, sister, co-workers, friend, etc.) don’t see what I text. But in reality, don’t get fooled, chances are the only person they’re really trying to hide this from is you. If this is your special someone, then who else can possibly spend more time with this person to that level? The answer is nobody but you. So let’s take off the blindfold and just assume that the only reason to have and use the TigerText App is to hide text messages from you.  Now let’s clarify that if this person is single and is just dating you or is just a friend-with-benefits or as we like to call it, “this chick I’m nailing” then they have the right to do whatever they want, no questions asked and you should really stay out of it and stop fighting over this because you have absolutely no right to say anything about the matter. Get the best quality and rates at https://app.sinpin.com/international-calling/.

Now, the real question is, what should you do next after you catch you significant other using the TigerText App? As I’ve stated before, there’s nothing to worry about because it is very simple, you should ask yourself, have I had enough of this? The question shouldn’t be if he’s doing something behind your back or not. The question should be what to do next and if you’ve had enough? As a guy I can say that we are pretty easy to please and the minute we decide to go that route and do things we shouldn’t be doing is because something is missing at home and our needs are not being met. So, your options are clear, either try to find what’s missing and what you can do to fix it or simply call it quits and move on. The last thing you want to do is nag and bitch about it every opportunity you can, because this will only cause more conflicts and if in fact he’s confused about the whole relationship, this could push him away even further. As a guy, nothing can be worse than to fight over the same issue time after time without ever coming up with a resolution to it. Never try to force anyone into a relationship because at the end it’s just harder when things are done and over. There has to be equal effort from both parties into a relationship and if you constantly find yourself being the one trying to make things work, you should take that as a sign that it’s time to move on and find someone who is willing to put the same effort you’re putting into it. Always remember to be realistic and know that sometimes, no matter how much you dislike the idea, things come to and end an there’s nothing you can do about it.