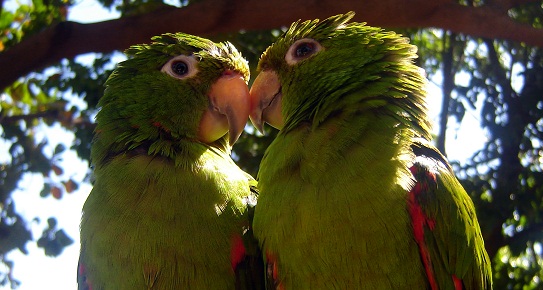 How can you tell if a guy genuinely likes you and isn’t just after you for some action?

Anyway, when we started going out he was always careful not to scare me away. Because I am wary getting “physical”. Like one time he would tell me offhand that he needs to be 10 feet away from me. There was one time when he attempted to hold my hand but I thwarted his advances by doing some other silly thing. Anyway, the more we went out though, the more I find myself wanting him to touch me. I gave him a hug. And it has been a ‘customary’ parting token for us. There have been instances that he tried to kiss me but I turned my head. I didn’t mind him kissing my cheek but I minded him kissing me on the lips. I am and I see a kiss as something more than just a kiss. We’ve discussed it too as we are upfront about matters. He said I am more important than any kiss and he won’t force it on me. It will only work if I want him to kiss me too. Anyway, as days dragged on though, I find myself thinking more and

more of wanting to kiss him. Two days before we both parted for the school break, we kissed. And the night before he left for vacation we kissed again. It was magical. The kiss was amazing. As I come from a culture where dating rules are ‘well defined’. I found myself caught in some limbo. I began to ask, does this mean he is my boyfriend now? So I decided to do what a perpetual does… I emailed him and we talked about how I felt. I told him I understood his stance on a casual relationship. I understood he is leaving. But I also told him I can’t be untrue to myself. I told him I want to be involved — to be able to tell him I miss him without feeling silly and tell him exactly how I feel without feeling insecure. I told him when I kissed him it was because I really liked him. And I told him I am fooling myself if I say we are just friends having fun as I don’t kiss my friends like that. He would tell me that ” that is exactly how I feel too. I’m not good at being mushy….with words….I kiss you because I like you and am into you….it is not casual….I didn’t say you are casual to me…what I said…is I am not thinking long term….indeed because I’m leaving in June…because if I think like that… there would not be any you and me if that attitude is casual then ok…”

We also talked about other things.. like how he said the important thing is me He doesn’t want to impose anything on me I also began to understand his actions better. Like how he goes about things with a one track mind and all that. And he says he will make an effort to be more mindful of me because he says he hesitates when he hasn’t called in days because he has no excuse (especially when he gets tied up with work. He has never broken a promise though. He calls when he says he will but there are just quiet days when I don’t hear from him but I also understand we are both busy people). He also said he wants to be more organized and hardworking next sem and be with me too. We pretty much agreed to keep seeing each other next term. I expect we will still both be busy but he told me to call him when he gets ‘sloppy’ (like he doesn’t call me) and that I should visit him at his building when he is caught up with his work. He says we will deal with our friends (Our friends don’t know we are going out yet). He “I’m yours”.

Anyway, so I left for home too and we would chat when we can but as it is the winter break we both have activities on both our sides. And the time zone difference is quite stark. We still talk about our day to day but there are things that surprise me and make me wonder if he is just after some action. Like recently, I was telling him about this little black dress I was going to wear an event. It was a passing comment for me but we started talking about it quite extensively — even to the point of him sending me links to little black dresses. And he asks me if he gets me one will I wear it for him. Three of the 5 dresses were something I would wear but the other two were far too revealing. He talks a lot about liking my body. I have serious issues about it because I have been called fat for a long time and being called sexy is something novel to me. To be objective about it, I am not obese I am busty for my height. I would be considered a “pocket Venus”. Anyway, he knows my NO SEX policy. But I was surprised by his daydreams He shared with me some of his thoughts.. and I was startled He didn’t get to the nitty gritty but he wants to touch me. Yet he also says he hopes I don’t take it as him attempting to steal my virtue. He told me he wants me to face him and sit on his lap (basically to straddle him) next time we kiss. I told him, we’ll see about that. He tells me “No is what you meant” and then we just shifted topics. I think I know him enough to know that he will not to force himself upon me. But now I’m wondering whether he likes me for me.. as he said he was attracted to my personality first and we’ve gone out for some time with NO TOUCHING at all… or is he really just after some action…

Last Honest Guy, I am really inexperienced such things. But I don’t want to classify him as a jerk because he desires me. Your opinion surely would help me as I think through this.

Plain and simple, this guy does like you. If he didn’t he wouldn’t be putting up with you and would just go and find another girl that does put out.

How can you tell if a guy genuinely likes you and isn’t just after you for some action?

Generally, here’s how you know if a guy truly likes you:

Keep in mind that a player would also do all of those things but the only difference is that he would give up sooner and it wouldn’t last. Sounds like this guy does like you.

It’s also very normal for a guy who is not only emotionally attracted to you but also physically attracted, to want to kiss you and touch you. Just because he wants to do all that it doesn’t necessarily mean he only wants some action.

My advice to you is to stop playing games with him. You know what I’m talking about, “I want you to kiss me but I turn away when you try”. If you want to be touch or kissed by this guy, just do it. Especially if you know you’re running out of time and he will leave soon.

Stop thinking that you have a sacred vagina and instead enjoy it. It’s ok to have sex if you truly desire it too. Don’t hold out just because you think is not the right thing to do. If in your heart you know you really want to be with this guy, just do it. You decide when the right time is and forget about cultural norms or beliefs. It’s your life and you set the rules. Just do it.