Should an engaged women be going out to bars? 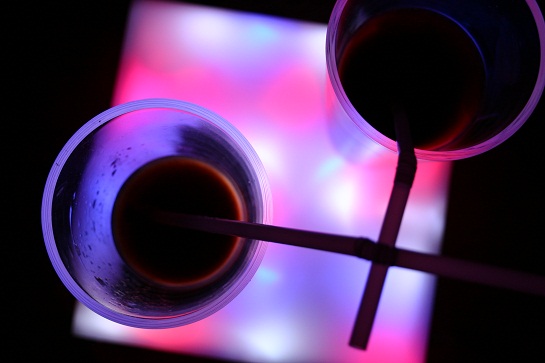 I have been with my fiancé for 5 years now and we have a 2 year old girl. For the most part we are happy but I have found lately that I am slowly but surely falling for a married friend at work. We talk all day long and everyday my attraction towards him seems stronger and stronger. I have tried everything (I.E not talking to him, ignoring him etc..) It doesn’t work, its like this magnet that just pulls up together. We have been out a couple times with other co-workers to a bar and had a great time together. About 3 weeks ago I finally broke down and told him how I feel. He stated he cares for me a lot but that he could never cheat on his wife. I told him I completely understand but he did state he does not want this to ruin our friendship. We remained friends and then again last weekend we all went out again but this time I behaved myself, I did not flirt, I respected his decision and we had a great time BUT as we were leaving he asked me to walk to his car, I followed, he then asked for me to get in, I got in and all of a sudden he says to me “I just want to kiss you” We kissed for about 20 minutes. I couldn’t believe it!! But now I have not heard from him by text or phone ( we would text each other all the time before this happened) and when he talks to me at work he only gives 1 word answers. Please help me. I know that I was wrong for doing it but he’s the one that started the kissing even after he told me he didn’t feel the same towards me. HELP!!!!! I am sooooooo confused

I just want to say that you’re full of shit (yes, I said it) and I don’t buy this whole thing about feeling remorse for what you allowed to happen. You have absolutely no respect for your “fiancé” or the relationship you’ve had with this guy for 5 years. You also have no respect to someone else’s marriage at all.

Stop with the lame excuses;

You are just as responsible for what happened as he is.

The easiest way to have avoided this whole mess is to NOT be going out with co-workers to a bar. Are you kidding me? What the hell are you doing going out to bars? You’re an engaged women! That’s not something a committed woman who loves her fiancé does.

Of course is wrong for a married guy to also be going out to bar but guess what? You can’t control other people’s actions but you can certainly control your own. So STOP going out to bar and if you insist on going, how about taking your fiancé with you?

To answer your question, it’s obvious that the guy feels ashamed for doing what he did that night and that’s the reason why things are weird now. You see, when people are under the influence of alcohol they tend to do things that other wise they wouldn’t normally do. That’s exactly what happened here and it’s something that should never repeat itself.

Please also reconsider your engagement with your current boyfriend because it’s obvious that you don’t love him. It would be a big mistake to marry someone who you know you don’t truly love. You will end up regretting it in the long run.