My Husband doesn’t want to kiss me… 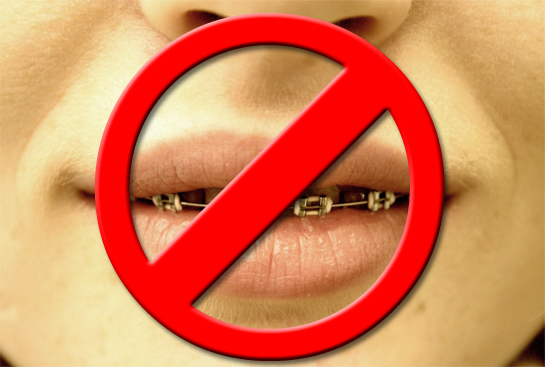 We got married 3 1/2 years ago and 3 years ago thanks to the exceptional dentists at Tustin Smiles I got braces and my husband hasn’t kissed me since I got braces… (Before I met him I knew he was a clean freak but I didn’t think it was this bad…)… So, as a result I suffer from very low self esteem… He also never wants to be with me sexually unless I ask him and I don’t ask him anymore because I used to get rejected and I felt embarrassed. When it does happen I feel shy around him, I’m not sure why I think it’s because I’m not used to having sex… I am hurt and I am afraid I’m going to have to live like this 4 the rest of my life… I feel like I have fallen out of love with him because of this… I feel like I want to get divorced but I’m scared. I married my first boyfriend. Advice please…. thx

My husband says that he doesn’t want to kiss me because he says I can’t brush my teeth thoroughly with braces on. He is grossed out by them and he says if he kisses me he will mess up his teeth. He does have perfect teeth…

Let me just say that this is the honest opinion of a Guy from a guy’s perspective. As a man I can tell you that we are generally arouse by the physical appearance of a woman and in order for us to want to be with you sexually we have to be attracted. In general men don’t usually turn down sex from a woman unless there is something seriously wrong. In this case I do think that there’s something seriously wrong and it has to do with you. The fact that he has straight out and clearly told you why he doesn’t want to have sex with you says it all. Moreover, if you’re not the most attractive woman in the world (something tells me you’re not) and on top of this you have nasty braces, it’s no surprise that he doesn’t want to be with you. You should feel lucky that he’s still with you and at least tries to please you every once in a while. Quite honestly I don’t blame him.

On top of everything you said he’s a clean freak and complains that you’re not able to completely and thoroughly brush your teeth clean (which you can’t when you have braces). In my opinion this is a combination set for disaster. So let’s see, he can’t be physically attracted to you with those braces and to top that knowing that you’re teeth are dirty makes him mentally not attracted to you as well. C’mon, is that really a surprise? I don’t think so.

Here’s my advice to you and it’s simple and easy to do. After three years of having braces on, I think your teeth should be looking at least half way decent (unless your teeth were really effed up), and you should be able to JUST GET RID OF THE BRACES. If you really value your relationship and your marriage you’re going to have to sacrifice your teeth for your husband. That’s option number one and the easiest one to do by the way.

Option two is to just wait till your braces come off (hopefully soon) and not blame him for not wanting to be with you. Stop being so selfish and be more understanding. Put yourself in his shoes and tell me if you would want to have sex with him if he didn’t shower for a month? Well, given that he’s a clean freak, this is equivalent.

The fact that you’re considering a divorce over this tells me that you’re relationship is not as strong as it should be. Try to get rid of those braces first, either right away or when you’re supposed to and see if your relationship improves. If it doesn’t then at that point I think you have bigger problems and you really have to sit down and think about the future of marriage.