Does he really care about me or does he just want action? 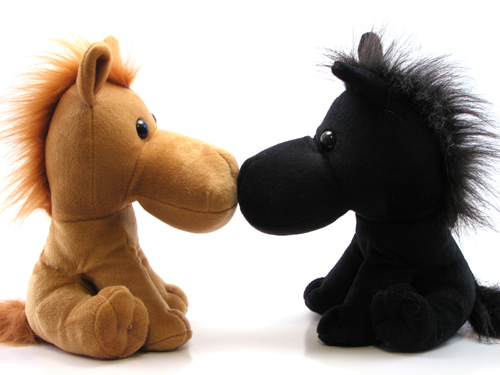 So this guy at work and I have messed around a little after the store closed in the break room. We only kissed for a bit and massaged each other, but never had sex. Well after that he texted me asking if I was okay with everything that went down. I said I was. Well after a while a few weeks passed and he wanted us to do it again. I said that I had a problem with it because I thought and felt like that’s all he wanted from me. He said he didn’t mean for me to feel that way about it. Then a few weeks later he said “I care about you” I jokingly said “no you don’t” he got really upset and I guess took it personal. He changed for a while and was very distant toward me. Well recently he said he “cared about me again but he knows that I don’t believe him” I then told him that I thought about it and I do believe him. Ever since then he changed and is sweeter and compliments me more than before. He says things like “I can’t stop looking at you sometimes” that I “distract him in a good way” and he is also talking about the times we had, after close when we messed around. And I guess wants it again. He seems really sweet. Does he really care about me or does he just want action?


First of all let me just say that this is the Honest opinion of a Guy from a guy’s perspective. Let’s start by saying that it sounds like he does like you. In fact, it seems like he likes you a lot and that’s the reason why he got upset when you didn’t take his statement seriously. Sometimes is hard for a guy to really come out a express he’s true feelings and when he does he’s taking a big risk at a chance that he might get rejected or look like a fool. In this case, it seems that you took it as a joke and perhaps hurt he’s feelings. Guys have feelings too, you know? Even though we don’t like to show them out of fear that situations like this one might happen.

Second, let me explain something about the way guys are. We are physical people, and before we even get to know a girl, at first sight there has to be physical attraction. At this point we are ready to kiss them and go as far as the girl lets us, no questions asked. Later, if we get to know her and turns out to be a pretty nice girl as a person, we might consider a relationship. Given that you guys work together, it’s possible that he has already gotten to know you and therefore has determine that not only is he physically attracted to you but has already considered a relationship with you as well.

Third, since you already “messed around” with him, you can’t just suddenly say I don’t want to do this anymore. That may be one reason why he likes you even more. Maybe you are a good kisser, etc. At the same time, if you like this guy and want a relationship with him, you should’ve thought about this before you decided to kiss him. For example, imagine someone that has a long time girlfriend and have sex on a regular basis and suddenly the girl says she doesn’t want to have sex anymore until they get married. How messed up is that? That would be wrong to do, don’t you think? That’s exactly what you’re doing right now. Part of being in a relationship is having physical interaction. You made the decision to start that before being in the relationship and it would be wrong to stop now. If you stop, you might even cause him to think you were only playing with him and he might lose interest. He obviously doesn’t mind starting a relationship with you, so it is up to you now. My advice is, if you want something with this guy don’t stop now, but if you don’t want anything serious with him at all, by all means stop and stop sending him the wrong signals. To answer your question, I would say both, he really cares about you and it’s only normal that he also wants some action.