A simple way to have a good relationship… COOK!!! 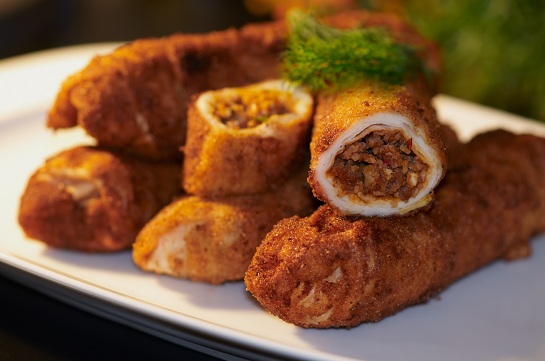 One of the simplest ways to improve a relationship or make a good one become a great one is by simply cooking for your man.

I often hear American women complaining about their man wanting to have a clean house or a home cooked dinner when they come home. They say things like, “I’m not a maid” or “this isn’t the 1950’s” but the bottom line is this is one of the easiest ways to improve your current relationship, cooking. I’m amazed at the number of women who don’t know a damn thing about the kitchen. What’s wrong with them? This is one of the fundamental elements in a relationship. Later they wonder why more and more men want to marry women from other countries.

Believe it or not, having a warm dinner on the table by the time your man gets home from work means the world to a man. It doesn’t have to be a fancy gourmet dinner or anything like that. You’ll be surprised what a man will eat when he’s hungry. Sometimes it doesn’t matter what it is as long as it’s warm and eatable it’s sufficient. We’re simple so don’t worry.

You have to remember that men generally want someone who is willing to take care of them in every way. Being feed is definitely one of them. Women generally want someone who is going to protect and provide for them, right? And even though now a day in most relationships both work in order to survive and have nice things, let’s face it, in most cases the man is the one who has the toughest and most stressful job and you should take that in consideration. They usually are the breadwinner of the household as well. Women on the other hand often have part-time jobs or at least less demanding occupations. It’s no wonder that secretaries and administrative assistants are on top of the list in the most common female occupations according to The Bureau of Labor Statistics (BLS).

Let me put it to you this way so that is easy to understand how important this is and why you should do it. Do you ever wish that your man would open the door for you? Perhaps it would be nice if he bought you roses sometimes? Or maybe a nice back massage would be perfect after a long day? Wouldn’t you enjoy all these things? I’m sure if your man would do this it would make you think you have the most wonderful man in the world, right?

Well, cooking is the exact equivalent of that to a man and all you have to do is try. Eventually, if you put enough effort into it, I’m sure you will become good at it. It’s not as hard as you think, there are countless websites out there with free recipes and sometimes even videos, not to mention all the cooking shows that come on TV every day that will teach you and help you become good at it. Cooking is just like anything in life, it only takes some practice and effort in order to become good at it. I’ll start by letting you in on my secret place for easy and good tasting meals, check out Sam the Cooking Guy. You know if a guy can cook well a woman can probably do it 10 times better.

You might also want to check out one of my all-time favorite, a popular book I use called America’s Secret Recipes by Ron Douglas where he teaches you how to cook your favorite dishes from your favorite eateries. Restaurants like The Cheesecake Factory, Chili’s, and many others. Give it a try, you have nothing to lose.

The most important thing here is that by simply cooking your relationship will improve tremendously and it’s easy to do. You wouldn’t believe what it does to a man to know he’s coming home hungry and there’s a plate waiting for him there. And it’s also a win-win situation. You have to eat too, right? So why not cook yourself something and just make enough for two people. The key here is to discover dishes you both like and start cooking them and you can’t go wrong with that. At the same time if you have kids or you’re planning on having them you will have to cook for them too, so why not start now and build a nice foundation for a family from the beginning? In addition, eating at home is a lot healthier because you know exactly what you’re putting into your food and it will save you a ton of money during these hard economic times.

Another thing to think about is since we know the abundance of women who cook now a day is scares, that might be a good reason why you’re man will value you even more and would never think of ever leaving you or risking the chance of losing you. Where else is he going to find a nice girl who takes care of him and feeds him? Don’t you think the same thing when you meet a guy who still opens the door for a girl or buy her roses? You start thinking he’s a keeper? Same idea here.

If you have a good man, chances are that by following these traditional gender roles he will start following them too. It’s only normal that if you start acting like a caring woman he will start acting more like a real man. Remember that everyone gets exactly what they put into in a relationship. If you don’t, you’re probably with the wrong guy and it will help you realize it faster and move on.

So, ladies would you try it and let me know how it goes?