Why would my ex send me a Friend Request on Facebook if he’s married? 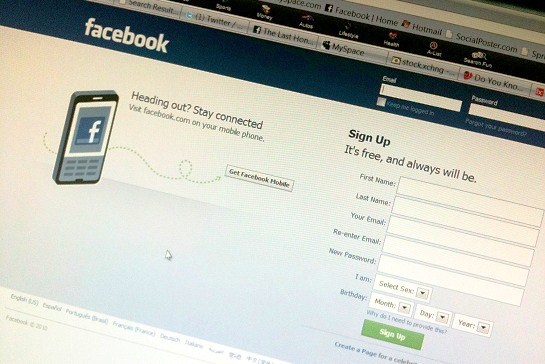 Ok so my ex is 26 too, and Latino. I met this guy in my last year of college and we went out for about 3 weeks. If I had known at the time that he had JUST broken up w/ his previous ex a few days before we met, I wouldn’t have bothered. So during the last week we were together, Not only do I find out he’s still talks to his ex, (she cheated on him so I didn’t expect him to be cordial) but he was still in love with her! Needless to say we had a horrible break-up after that, (involving him trying to break up with me over email) I never spoke to him again. So yesterday, I get a friend request from him on facebook, and as shocked as I was, it was nothing compared to the fact that I found out he is now MARRIED. And NOT to the chick he left me for. No surprise there. So why is he trying to approach me now? It was confusing back then when we met because everything happened so fast, (which should have made sense seeing as how I was just the rebound girl) and it’s even more confusing now. I was happier to just forget about him. What do you think?

Quiet honestly I’m a little surprised you’re giving a guy you only dated for 3 weeks this much importance and attention. It worries me a little because that’s a sign that you might still have some feelings (I hope you don’t) for this guy.

Let’s recap on this guy for a minute, he’s a 26 year old (younger at the time) who bounces around from woman to woman and ends up marrying one, but later triers to contact an ex. Does that sound accurate? I think so.

Trust me when I say, you’re not the only girl he has contacted!

Facebook and other social networking sites are notorious for hooking up with other people.

So, to answer your original question, So why is he trying to approach me now? In simple terms, he wants to get laid. You didn’t specify if you guys slept together during those three weeks you dated him but since now a days even sleeping with a guy on the first date is normal, I will assume you did. Now that he decided to contact you, he’s testing you to see you’re reaction and see if there’s still something there. By allowing you to see he’s married he’s also letting you know he doesn’t want anything serious just the chance to hit it again. And if you guys haven’t slept together before (doubt it) then he’s just trying to see if he can get in your pants the second time around.

It’s important for you to keep in mind that if you even consider talking to him again you will never be anything more than a booty call, no matter what he says or promises. These kind of guys are generally really good at making you think whatever they want, but all the warning signs are there and it’s now up to you to avoid him. My advice to you is to avoid all contact with these guy. There’s nothing positive he can bring to your life at this point. By having any kind of contact with him you will not only harming yourself but also that innocent wife he has. I’m sure you wouldn’t want your husband to be talking to other women behind your back and you would definitely not want to be the “other woman” either.

I would also like to recommend you read my 7 easy and simple steps to finding the right person to marry even if you’re not looking to settle down right now. It will help you get on the right track for when you’re ready to. I hope this helps, wish you luck in the future and don’t hesitate to contact me any time you need me. I’m here or you can also find me on Twitter and don’t forget to become a fan on Facebook.