I understand that he is busy, but should I still date him? 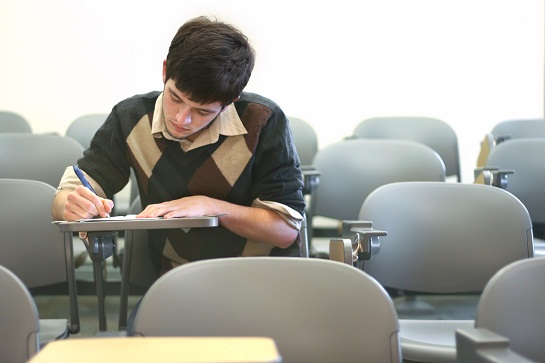 I met a guy who is balancing a pretty interesting life. He is 20 years old and speaks English as a second language (technically still learning). Most people who see us together assume we are a couple or at least that he is interested in me. He also seems to have liked me for quite some time and has tried to make it official but would get intimated by my male friends. Recently, he has only hinted at the idea of a relationship with us. When he is around me he swings from confident to unsure of himself and usually only makes most of the effort when we are together (but does not initiate scheduling). The issue started when I began inviting him to a few events after he showed interest and stated that he wanted to see me again. Generally he would tell me why he was unavailable and suggest a better time; but on rare occasion he’d ask about the activity and not get back to me at all. My friends began to tell me he definitely wasn’t interested and that no guy is *too* busy for anyone (“He’s just not that into if…”). After listening to my friends (all females of course) I assumed he wasn’t interested as well and stopped trying to follow up with him. After a few weeks of not talking or meeting up, I asked if he wanted to hang out. He quickly started digging into me saying that we haven’t done anything we planned so far, how he doesn’t understand why, and it was upsetting to him. I suddenly became upset;

felt attacked, and asked him to go into detail. Sadly, the conversation was not productive. I had a difficult time explaining myself because I was so stunned. He seemed to be treating this situation as if we were in a relationship already. He completely shut down and then immediately tried to see me afterwards.

He is in America with student visa and working so that he can support his family. He comes from a society that set males above females and is the only son in his family. The family that he lives with has taken him in as more of a fatherly figure. He takes care of all the children, drops and picks them up from places they need or want to be, monitors them, and teaches them things that a father would. His mother is constantly on his case about not having a son to brag about, calling it “embarrassing”. He is attending college and paying for it on his own, but she is upset because it is not internationally recognized. Now he is trying to pick his grades up so that he can transfer to a better school (that he won’t be able to afford anyway). She is very demanding and criticizes, what seems to be, most of his actions. He is unable to verbalize how he feels about her (good or bad) and generally just resorts to giving her material items to appease her. Meanwhile, he works weekends and late weekdays to pay utility bills and other cost of living that arise within the household. He has things of his own and is overall very self-sufficient. He always seems to have financial issues, most of which aren’t his burden to carry anyway. He’s also stingy and generally prefers not to use text much as it cost money and takes time, but will text occasionally and sometimes surprise me with gifts. He keeps a very small and close group of friends and can be found studying with them in his free time for long hours….or spending hours completely distressing.

I understand that he is busy and tried not to be selfish by staying on his case about why we haven’t met. We both have stressful lives and clearly need to deal with what’s important first. But now I’m a bit confused and I’m not getting good advice from my rather emotional friends (about males in general actually).

1.) Do you also feel that he had a legitimate excuse or am I being dumb in believing him?

2.) What would be the best way to explain that I understand and empathize with him? As of now, I feel as though he thinks I’m more high maintenance than I truly am.

3.) I’m still a little shocked by him having a sudden outburst of emotion regarding the amount of time we’ve spent together. Why would he freak out like that and then suddenly get passive aggressive?

1. From the sound of things I do feel like this gay may just be too busy for a girlfriend. He seem to have his priorities straight, which are school, work and the family he lives with. I think he would like to have more time for a girlfriend but like I said before it’s just not a priority to him right now and that’s the exact reason why constantly changes plans or puts them off for another time. I do believe he has some interests in you but not enough to put you on top of that priority list.

2. I don’t feel there’s a need for you to explain to him that you’re not high maintenance. I do however think that you like this guy enough to lower your standards and be willing to accept a “part-time” boyfriend. You deserve a full time boyfriend who can give you your place. I mean, really think about this; why would you want to be in a relationship who doesn’t have time for you and who is very likely to move away as soon as he finds a better school to go to. I guarantee that if he found that “better” school he wouldn’t think twice about you and would leave in a heart beat. Quite honestly I don’t blame him either. He’s young and his future SHOULD be his number 1 priority at this point. By the way, it should be yours as well.

3. Some people just see thinks in a different way. He is from a different culture and that may be a reason why he would assume you guys were officially a couple, specially if you say everyone who sees you together would assume the same thing. At the same time the language barrier could have played a role too and he may have thought he had express enough interest in you to consider you his girlfriend. Clearly that wasn’t the message you got.

My advice to you is to move on. Why insist on trying to have a relationship with someone who quite frankly I don’t think there’s a long future ahead. You don’t seem to be too invested in the relationship right now and should be fairly easily to just keep him as a friend. By the way if you’re just so into this guy because of his looks, thus the reason you’re willing to put up with being #2 then just be F-buddies. It’s completely ok to have a pure physical relationship with someone while you find the right person. Trust me, he will make time for that.