Are you a cougar who wants to date younger guys? 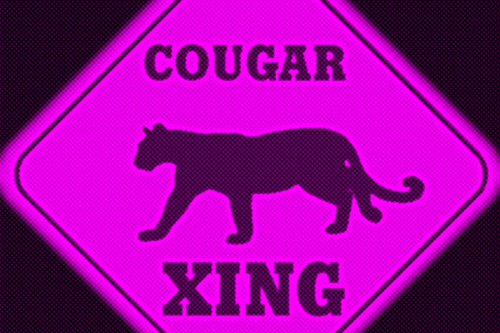 I’m a woman of 48 who thankfully looks and feels about 33. This is due to keeping active and eating well. I’ve had a good career and lots of lovely friends. My only heartache is that is seems so difficult to have a relationship which works and lasts. Sure I’ve had two serious boyfriends, one for a year and a half who wanted to marry but I wasn’t into him enough to settle. The second was 14 years younger and ended the relationship after 4 years as he couldn’t commit for a life. I am a good person and would love to meet someone with whom it works. I’ve tried dance classes, traveling and even internet dating clubs all to no avail. I usually go about my day without focusing on this as I tend to take it in my stride. This helped by the fact that I often get asked out and do feel attractive. The problem is that I’m only really attracted to much younger guys. I don’t want a guy who has children. However, after the most recent breakup with a guy of 24 (we dated for 2 months) I feel that it is so hopeless. This hurt me a bit as I liked him so much even though he had a serious drink problem and knew it couldn’t continue. I started saying to myself ‘am I a lesbian?’, it was that bad! I know I’m not a lesbian of course but why is it so difficult? Thanks for any advice.

First of all let me just say that this is the Honest opinion of a Guy from a guy’s perspective.  Being a woman of 48, you should not be looking for guys that are much younger than you. Let me explain, A guy who is younger than you is more likely to have a different prospective in life than you. In other words, you guys have different interests. He might want to drink and have fun and not settle down. Hint: the 24 year old guy. I would say that a guy who is 35 and up, is more likely to want to settle down only if he doesn’t have kids or has never been married before. If this has happened and he’s now single, than he’s probably the kind that started too young and this is his second chance at life and is definitely not looking to settle down again.

In my opinion it seems that you really like the attention of young guys because it makes you feel young too and because obviously a younger guy looks physically better than a guy your age. The problem here is that there is a difference in the stages of life you are both in. Mainly the fact that you want to settle down and they don’t. That also includes a lot of other differences that are only normal for their age group.

My advice would be to look for guys that are closer to your age because chances are that both of you might have the same priorities in life. Now a day, there are a lot of 40-50 year old guys that also look a lot younger than their age and have a healthy life style as well. One good place to start looking is the gym. If a matured age guy is at the gym and looks good, chances are that he’s into a healthy life style already, which seems to be one of the major requirements for you in a partner. At this point in your life you might also need to compromise some of the things you need in a guy. For example, chances are that a mature guy that looks good probably has kids, and that’s normal. Think about it, he was probably even better looking when he was younger and therefore had a lot of available options, so chances are that he’s already divorced or has kids. What I’m trying to say is that you need to pick your priorities of what you want in a guy and separate them between the “must have” and “should have”.  Be realistic or be very patient. Those are you two options.

Well, this is a post that I like to refer to as “oldie but goody”. It was actually published a few months back but I wanted to give some of my new readers a chance to catch up on some of my older posts. I hope you guys enjoy it. As always feel free to leave any comments below and don’t forget to sign up for my mailing list and become an “Honorable Reader” so you can take advantage of all the benefits.